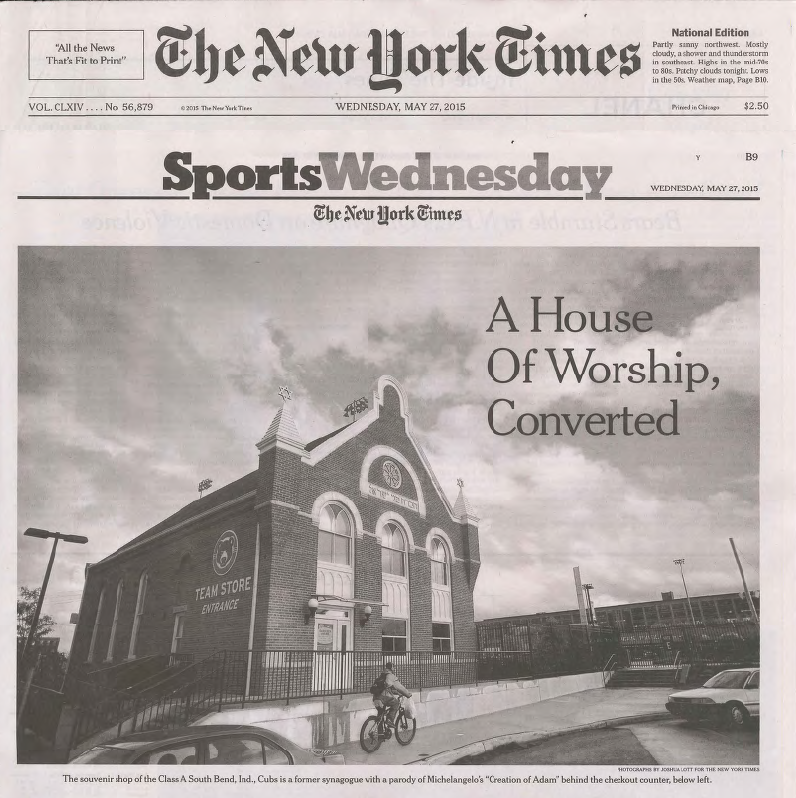 Not long ago, the oldest synagogue in this college town underwent a $1 million restoration. The building, to the relief of many, was salvaged from disrepair and possible demolition. But in the process, its character was markedly changed.

Today, atop rows of red brick, the interlocking triangles of the Star of David sit alongside the interlacing ovals of the Toyota logo. At the delicately refurbished bimah, where the Torah was read aloud to congregants for close to a century, clerks in uniform operate a busy cash register. The synagogue’s stained-glass windows and old chandelier, repaired to glistening condition, splash light upon racks of T-shirts and tables full of knickknacks like shot glasses and foam bear claws.

Inside one doorway, the words of Exodus 25:8 curl in illuminated script across a cream-hued wall. “Make for me a sanctuary,” the verse reads, “and I will dwell in their midst.” Outside, a sign above the entrance denotes what this 114-year-old sanctuary has been renamed: the Cubs Den.

In the summer of 2012, the Sons of Israel synagogue, which had not housed a congregation since 1991, was repurposed as a souvenir store for the minor league baseball team next door. Before this season, the club ended a 17-year affiliation with the Arizona Diamondbacks and became the Class A team of the Chicago Cubs — hence the shop’s name and the bear claws inside.

The synagogue sits just beyond the left-field wall at Four Winds Field and may occupy a singular place in the already colorful landscape of professional sports. Tzvi Novick, a professor of Jewish thought and culture at nearby Notre Dame, described the building, with some wonderment, as a “complex mixture of homage, kitsch, and commercialism.” It is simply, he said, “a very interesting cultural object.”

It became that way, apparently, through a conflation of efforts and aspirations: those of a Jewish community trying to preserve a presence in an area where it once thrived; those of a city hoping to revitalize a flagging neighborhood; those of a savvy businessman resuscitating a floundering team.

It has at once reflected a demographic shift in the region and highlighted the complicated tensions in the growing field of historic preservation.

It has left scores of people in the community ecstatic, irked, amused or some combination thereof.

Andrew Berlin, 54, who bought the team on Nov. 11, 2011 — finalizing the deal, for numerological reasons, at 11:11 a.m. — split the cost of renovating the synagogue with the city while signing a 20-year lease on the ballpark. Berlin, the chairman of a Chicago packaging company, describes himself as a “twice-a-year Jew.” The idea to display the Old Testament verse was his. He had encountered the words somewhere and thought of his stadium.

“I thought of making a sanctuary for everyone, not just Jews,” said Berlin, who is also a minority owner of the Chicago Cubs. “Baseball for me is more than the game.”

Berlin has applied that philosophy to his team, which suffered from low attendance under its previous owner, Joe Kernan, a former Indiana governor. The ballpark’s ethos now seems closer to Walt Disney World than Yankee Stadium. Berlin has focused on details, including having the team’s mascot sprayed with cotton candy cologne before every game. Improvements have totaled $10 million, according to the club president, Joe Hart, and this season the team will easily set a franchise attendance record. Merchandise sales, Berlin said, have gone up 850 percent since he bought the team.

“It was an O.K. ballpark to come see a game before, but now, especially for families, there’s just so much more, and it’s a lot nicer,” said Glenn Kozora, who sat for a recent game in the new Buffalo Wild Wings home run porch in left field. To his left was the new Miller Lite Tiki Hut. To his right was the new Budweiser Picnic Garden. Directly behind was the new team store.

Inside, sports souvenirs sat arrayed in an atmosphere of vague religiosity. Behind the cash register, between the white and gold columns restored from the original synagogue, there was a parody reproduction of Michelangelo’s “Creation of Adam,” with God, in this version, reaching out with a baseball glove and the words “Play ball” written in gothic type.

Carrying a bag of souvenirs for his two children, Rob Rohena, of Nappanee, Ind., guessed that geographic context might affect how the synagogue was perceived.

“Where I was born, maybe they would have seen it as sacrilegious,” said Rohena, who was raised around Hasidic Jews in Bay Ridge, Brooklyn. “But here — I don’t know — it’s nice to see them make use of the building.”

Berlin laughed aside the notion that some might find the décor distasteful, noting it was meant to be kitschy.

“Everybody knows that Eve stole first and Adam stole second,” he said, “so baseball is all throughout the Old Testament.”

Still, Berlin acknowledged there was a line. Early on, he proposed putting a target on the roof of the synagogue, and if any batter struck it with a home run ball, he would give away a car. But the rabbis and Jewish community members advising Berlin told him the plan was in poor taste, and the Toyota banner went up instead.

Bob Jaeger, president of Partners for Sacred Places, a nonprofit organization focused on the conversion of historic religious buildings, said such tensions and discussions were becoming increasingly common. In an ideal situation, he said, a converted place of worship respects its old identity, maintains its visual character and continues to contribute to the community.

“I think these are healthy debates because more and more sacred places are changing hands,” Jaeger said. “As a public, we should pay attention.”

Many current and former members of the community were relieved to see the building restored. For others, the feeling has been closer to resignation, something short of satisfaction.

Robert Nevel, 61, an architect in Chicago, grew up attending the synagogue. He became emotional last week recounting his bar mitzvah at the checkout counter.

Nevel said that the overt commercialism and kitsch inside his old synagogue made him uneasy, and that as an architect he also felt let down. He rued, for instance, that the original stone base, a distinguishing feature of early Chicago architecture, had been “mucked up” with the installation of a concrete accessibility ramp. And he said positioning the cash register in the holiest area of the synagogue felt like accidental symbolism.

“If this had been done by Rem Koolhaas,” Nevel said, referring to the provocative Dutch architect, “I would think it was a sardonic commentary to what we pray to, the high priest of commerce. But I think this would be giving them too much credit.”

And still, Nevel echoed several who invoked the Hebrew law that discourages waste, bal tashchit. The synagogue, they said, is clean, serving a purpose and, most important, still upright. That means a lot.

The synagogue housed an Orthodox congregation from 1901, when it opened amid a bustling Jewish community downtown, until the 1980s, when it briefly became Reconstructionist. In 1991, with almost no members, the building was donated to Indiana Landmarks, a private historic preservation foundation. In 2005, the foundation sold the synagogue to Chris Wood, a sound and light technician who briefly used it as a private home. In 2007, the city bought it for $130,000.

Various plans were discussed, but none stuck. The Jewish Federation of St. Joseph Valley wanted to move the synagogue to its campus, also in South Bend, across the St. Joseph River. The History Museum of South Bend considered making it a nondenominational museum of religion. City planners had already discussed using it as a stadium gift shop years before Berlin bought the team.

Judy Shroyer, president of nearby Temple Beth-El and a lifetime resident of South Bend, said it was good that thousands of people would walk through a historical synagogue in a region where many referred to them as “Jewish churches.” But she said she and her neighbors still sometimes felt compunction.

“There’s been a huge amount of discussion and a lot of wringing of hands: ‘Isn’t it terrible what’s happened to our little shul?’ ” Shroyer said.

David Piser, 75, the final caretaker of the synagogue before it closed, said he had now grown tired of the criticism. He listens to detractors and then asks them, “Where were you when we needed you?”