The ideal next owner of the White Sox was discussing his love affair with the Cubs.

It peaked in 1969, when Andrew Berlin was a 9-year-old in Glencoe who idolized Ernie Banks, but he sounded like a kid again Thursday over lunch describing his meeting here two years ago with Cubs President Theo Epstein.

Epstein, along with general manager Jed Hoyer and player development head Jason McLeod had come to hear Berlin sell them on the idea of changing Class A affiliations.

“When that window opened in 2014 to leave the Diamondbacks and talk to the Cubs, we made a beeline for Theo, Jason and Jed and begged them to visit South Bend,” the South Bend Cubs owner said. “What I showed them was the road to the World Series starts in South Bend. That was the headline of the presentation. That was the pitch. Bold, but fortune favors the bold.”

Berlin married his wife, Courtney, after meeting her at Heathrow Airport. The CEO of Berlin Packaging in Chicago became a limited partner with the White Sox in 2007 after hearing from his daughter’s friend that her grandfather wanted to unload shares. He invited the BoDeans to play on the outfield grass at U.S. Cellular Field for his 50th birthday party.

Bold could be Berlin’s vanity plate and nobody would blink.

“I told Theo, ‘I know you don’t care how good our hot dogs are or customer service is or how pretty the ballpark is,”’ Berlin, 56, said. “‘What you care about is our player development is better here than anywhere in the (Cubs) system. I’m going to commit millions of dollars of my own money to build a facility for players so you know when you send Single-A players or major-leaguers here for rehab assignments, we will take care of them.'” 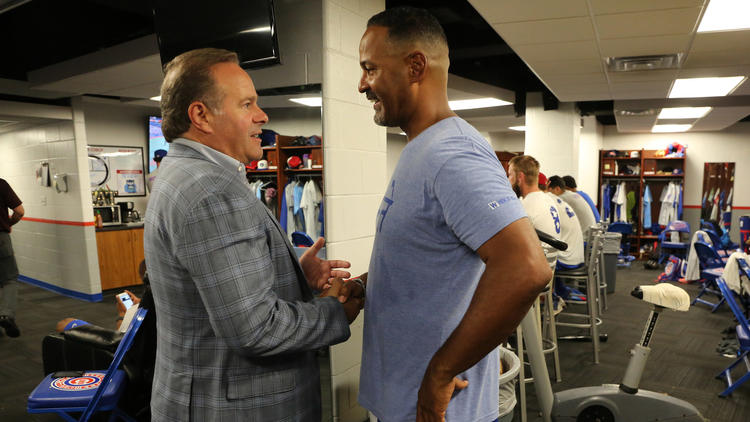 Berlin greeted concessionaires by name as he enthusiastically led a stadium tour, stopping to admire the bronzed likeness of Baseball Hall of Famer and South Bend legend Stanley Coveleski he had commissioned by the same sculptor who did the Michael Jordan statue.

“You have to respect local traditions,” Berlin said.

Since buying the team in 2012 and signing a 20-year lease, Berlin has put $8 million of his own money into the 29-year-old, city-owned ballpark. Upgrades included adding outdoor suites, a splash pad and a tiki bar, as well as hiring Sox groundskeeper Roger Bossard to install a new field. Earlier Thursday, Berlin received approval to purchase more land surrounding the park to construct four apartment buildings that will continue the revitalization in a neighborhood that needed it.

“I get more people shaking my hands on the street thanking me for turning South Bend around than bringing the Cubs here,” Berlin said.

To serve fans better, Berlin identified 24 moments called “touch points” intended to make sure customers want to return. The team worked with the city of South Bend to change directions of one-way streets to ease traffic congestion. It employs high school cheerleaders in the parking lot and pipes in oldies music. The mascot is sprayed with “cotton-candy cologne” so kids want to take pictures with him. Hot dogs are flown in from Boston because the Baseball Writers Association of America voted the Fenway Frank baseball’s best. Bathroom attendants wear tuxedos. 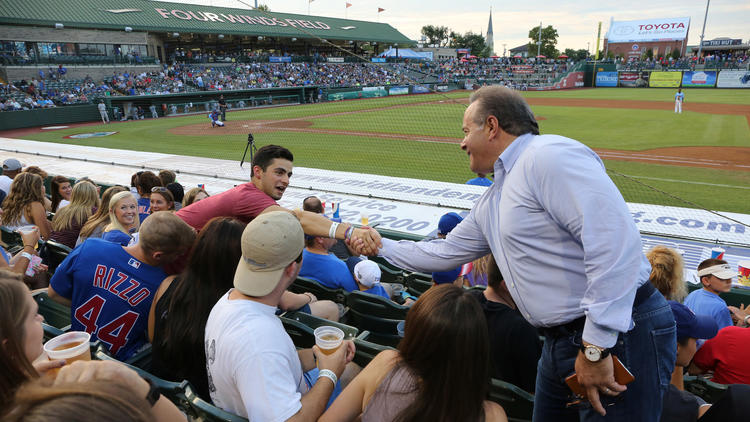 Attendance at Four Winds Field increased exponentially. In the season before Berlin bought the team at 11:11 a.m. Nov. 11, 2011 — for superstitious reasons — the team drew 112,795. Attendance was 347,678 last year and, with crowds averaging 5,053, looks poised to break that record. Merchandise sales increased 700 percent since the Cubs affiliation. Winning the John H. Johnson President’s Award as America’s premier minor-league team represented how far the franchise had come.

“It’s all Andrew’s passion and vision,” South Bend Cubs President Joe Hart said. “I remember asking him during my interview, ‘You live in Chicago and the team is in South Bend, so how involved will you be?’ He said, ‘I’m all in.’ And this has been his second home.”

On busy days, instead of driving, Berlin goes from Glencoe to Chicago Executive Airport for the 19-minute flight over Lake Michigan. He stays in different hotels, to split the business equally. The 2005 World Series ring Berlin received when he become a limited White Sox partner remains in a safe; and he has shelved the ambition he once had to buy the team from Chairman Jerry Reinsdorf. The type of hands-on, energetic owner a sleepy Sox franchise needs, Berlin made unsuccessful overtures to Reinsdorf in 2009 and again in 2012.

“When Jerry was unwilling to sell, I respected that completely,” Berlin said. “It’s an iconic franchise. It’s a beautiful stadium to go to. I would have had a lot of fun if the timing had been different.”

Berlin proudly acknowledged he now has more money invested in his beloved Cubs than the Sox. Before major-league baseball ownership rules changed last year, Berlin converted his Sox investment into a trust for his sons Cole and Gavin. He also began the process of converting the boys from Sox to Cubs fans.

“I thought it was important for everyone to know I’m all in on the Cubs,” Berlin said.

Nobody in a city whose downtown Berlin helped revitalize has any doubt about that.