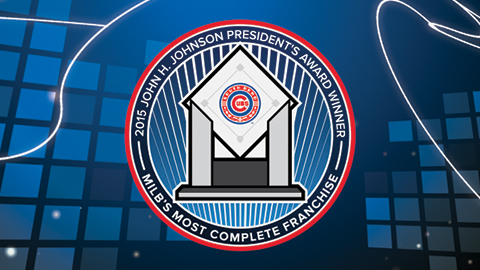 Minor League Baseball (MiLB) announced that the South Bend Cubs professional baseball team has been picked from among all 160 teams in the country to receive the highest honor in MiLB.  The team is the 42nd recipient of the annual John H. Johnson President’s Award which will be bestowed upon South Bend representatives during the Baseball Winter Meetings on Sunday, Dec. 6, in Nashville, Tennessee.

The John H. Johnson President’s Award has been presented annually since 1974 to honor the complete baseball franchise. Award criteria are based on financial stability, contributions to league stability, contributions to baseball in the community and promotion of the baseball industry.  South Bend is the second team in Indiana history to win the award, ending a 27 year drought that’s lasted since the Indianapolis team won in 1988.

“Frankly, this is an award we have to share with every fan in every city, town and village from a hundred miles around. Without them, we wouldn’t be receiving it,” commented Andrew T. Berlin, owner of the South Bend Cubs. “This is the greatest baseball region in the world. And it’s an honor to accept this distinction on behalf of the executives at Four Winds Field who make it a place to call home for nearly 350 thousand men, women and children all summer long. We have the best executives in the business and the best fans in minor league baseball.”

Last winter, South Bend announced a new player development contract with the Chicago Cubs organization and in their first year as an affiliate of the regional fan favorite, set franchise records for largest single season attendance (347,678) and average attendance (5,039) at Four Winds Field.

The South Bend Cubs host Home Run for Life, a charitable event that each month recognizes a different child suffering from a devastating disease. In 2015, more than $15,000 was raised to benefit the children’s hospital. The club also participates in charity concerts, reading programs, charity walks and youth events to make South Bend a better place for everyone.

“On behalf of the entire South Bend Cubs organization, we are incredibly honored to accept the 2015 John H. Johnson President’s Award,” said South Bend Cubs President Joe Hart. “To be selected for this prestigious award over some of the best franchises across the nation is extremely humbling. The 2015 season broke a number of longstanding records in South Bend and would not have been possible without the hard work and dedication of our front office and gameday staffs. We pride ourselves on having the most passionate and customer service-focused people working for us. It is wonderful to see their hard work recognized.”

Since 2012, team owner Andrew Berlin has spent more than $7 million in renovations and improvements to the city-owned ballpark. Major capital investments were made during the 2015 season to improve the playing surface, the player clubhouse and build one of the best year-round baseball training facilities in the Midwest which is open to the public.

“Of course, we would be remiss if we did not thank the Chicago Cubs organization and their entire staff for believing in our vision of providing the best facilities and care for player development,” remarked Hart. “We also want to thank the staff of the Midwest League and President Dick Nussbaum who provides incredible support. We are honored and privileged to represent a league with so many quality organizations.”