By Daniel I. Dorfman 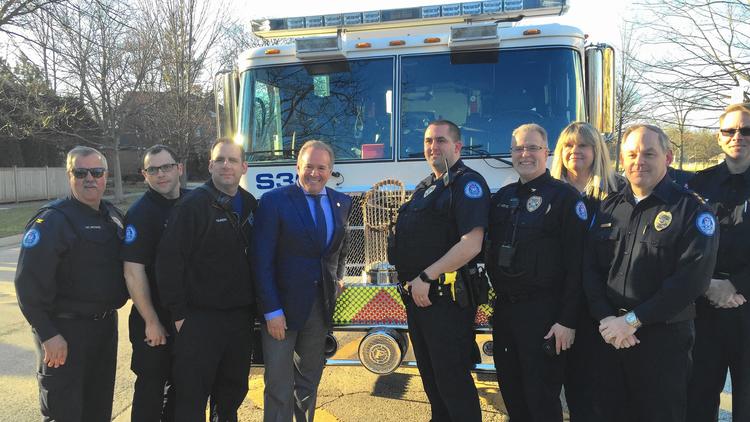 Chicago Cubs fan James Rosenfield waited a lifetime to see his team win a World Series. So he certainly didn’t mind standing in line for 35 minutes in chilly temperatures as the team’s World Series trophy was displayed in Glencoe Tuesday.

But he also wanted his friend to share in the experience.

When Rosenfield approached the trophy displayed at Central School’s Misner Auditorium, he asked that one picture be taken of him posing with the trophy, along with a second one as he held up his iPad showing a picture of his friend, Bob Keats, who grew up in Highland Park. Keats is a fellow devoted Cubs fan who now lives in Los Angeles and is battling a serious illness.

“He doesn’t know I’m doing this. This is the next best thing,” said an emotional Rosenfield. “He can be here in spirit and celebrate with the rest of us. He would have loved to have been here.”

Rosenfield’s tale was just one of many on a day when fans of the team once known as the “Lovable Losers” began lining up three and a half hours before the doors opened to get a glimpse of and take pictures with the trophy, according to District 35 officials.

Glencoe resident Andrew Berlin, a Cubs minority share owner, arranged for the trophy appearance. At the end of the day, he posed for pictures with the village’s public safety personnel with the trophy perched on a fire engine.

Noting the trophy’s code of “Tiffany,” Berlin said he started working to arrange the trophy’s Glencoe appearance after the first of the year.

“I asked for Tiffany to come to Glencoe,” Berlin said. “She has a busy dance card, but she is the prettiest girl in the room.” 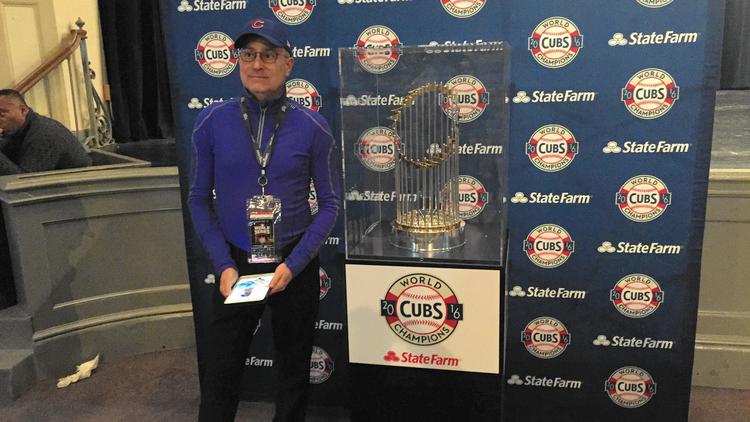 While getting logistical assistance from the Village of Glencoe and the Glencoe Park District, District 35 arranged for fans, many donned in Cubs t-shirts or hats, to enter single file into Misner to view the trophy and take a picture as a team highlight video played overhead.

Their brief time with the trophy hardly seemed to matter for the adults and children who root for a team that last won a World Series title in 1908.

“For me, this is more of a celebration for the community to be able to come and see this,” District 35 Superintendent Catherine Wang said. “That is wonderful.”

Among those waiting in line were Indianapolis resident John Gardner, a 1960 Central School graduate who was returning to his elementary school for the first time. 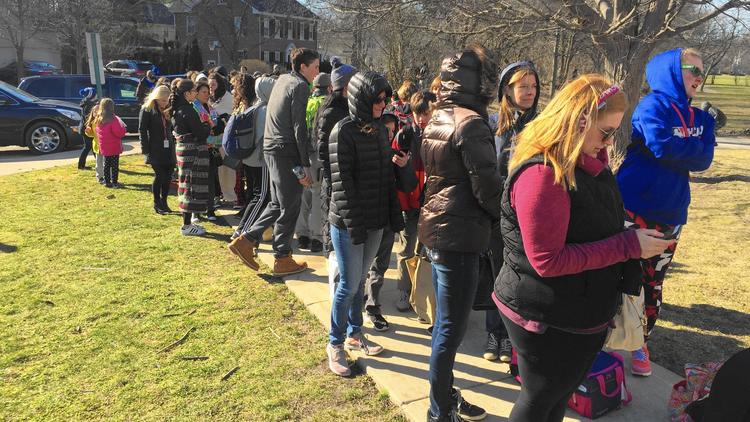 Gardner was joined by his daughter, Jessica, who lives in Lake Bluff.

“I called and said this is a once in your lifetime thing,” she said. “It is more fun to do this with my dad, because he taught me about baseball when I was little and I grew up watching Cubs games.”

John Gardner said there was an extra reason why he was enjoying this day.

Executives of the nearby Writers Theatre also came by, and noted they turned the Theatre’s lights blue during last season’s playoff run.

“It’s so special to have it in Glencoe,” Writers Executive Director Kate Lipuma said. “Once in a lifetime. Hopefully not, we need another one.”

Near the head of the line before the 4:30 p.m. door opening was Tara Klemme, wearing a Cubs hat and earrings. She drove an hour from Griffith, Ind., to see the trophy in person.

“I happened to have the day off and I wanted to see it,” Klemme said. “It could be another 100 years before we see it again.”