See the video by clicking here. 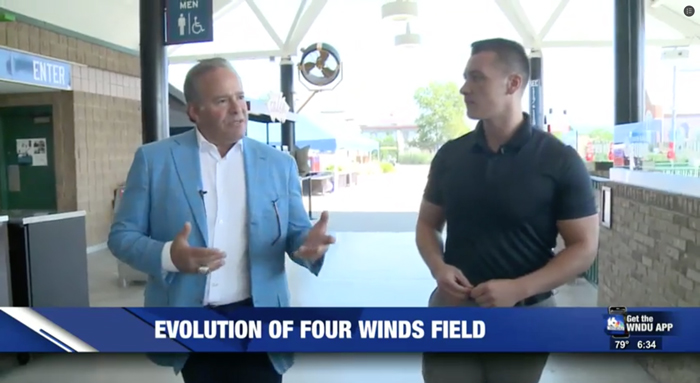 Andrew Berlin: Well I wanted to make this a greater experience, at that time, when I met Joe Kernan, the attendance had been dipping for some years, and the team was in a bit of a decline, although there had been some recent renovations to the stadium, I knew that the only way we were going to be able to generate the revenue to make further investments in the team was to get more people to come.

So with a critical eye, we looked at not just the employees who worked here but the physical plant, the stadium, the food, the concourse, I mean every particular touch point, when someone walks through our turnstile into the stadium, how are they being greeted? What do they smell? What do they see? What do they hear? And Joe Hart and his team, the folks in the office and myself, we sat down for weeks and months trying to design an experience that’d be more than just baseball.

Gehn: So let’s talk about some of those things that you’ve put into Four Winds Field. A lot of stuff that’s gone up here over the years.

Berlin: Yeah, so what we focus a lot on is I know the decision had been made at the time to put artificial turf in the field for maintenance and cost reasons, but honestly I think baseball is meant to be played on grass and more over, the Cubs never would have come to South Bend if we had artificial turf. When it comes to player development and strength and conditioning, there’s no question the turf that they play on is the turf that they mimic at Wrigley so we started there.

Beyond that, we had to make sure that the experience was magnificent and so as you look around the ball park, we clean it after every game where in year’s past before I got here they cleaned the stadium once a week or once a homestand so it’s sparkling clean before everyone walks in, they feel they’re walking into a place where they’re safe and comfortable.

And then I started to build from there. People who came back to the Stadium told their friends and family and they brought people and attendance has grown every single year since then and we’ve more than tripled attendance in the last five years but we’re not done. I’d like to triple it again. A lot of people in this area, I’d like to see them all come out to the ball park.

Gehn: Being affiliated with the Chicago Cubs organization, how much of a game changer was that for you guys in terms of getting people here and really expanding this place?

Andrew Berlin: It’s made a big difference. Folks before used to come for the entertainment experience because, let’s face it, there aren’t a lot of Diamondback fans outside of Arizona. Now we were drawing interest not only for entertainment but people are coming here to watch baseball. They want to see how the future Cubbies are going to perform.

And then, of course, we’ve been blessed with some rehab assignments, though I say blessed, I don’t want anyone to be injured and you want everybody to stay healthy but it does happen in baseball so for Dexter Fowler to come here, for Jason Heyward to come here is a real vote of confidence and that way people can see in a very intimate environment, Major League players.

Gehn: When you look in front of Four Winds Field right now, a completely different landscape going on here, what’s your vision that you have going on?

Berlin: The vision today is that you look down here from centerfield on, this entrance will now be a canyon, if you will, there will be two apartment buildings with balconies overlooking the plaza. In the plaza there will be mixed use retail, restaurants, hopefully a grocery store, pharmacy. The kind of important and relative retail that is important to this area.

The good news is, we’re building this to make it something proud that will last 100 years or more. We’re building with top notch materials, finishes that are special and a lot of things that are behind the walls that nobody will see but I’ll know they’re there. I’ll know that we;re building something that is first class and that carries over from the culture fo the Cubs and what we’ve done at Four Winds.

Gehn: So this is almost, in a sense, if you’re in Chicago, in Wrigleyville?

Berlin: I think that’s what drives us, this Renaissance of the entire downtown district and that’s really what we’re hoping for. We’ll only be a 5-10 minute walk from the center of downtown and that’s nothing compared to what it takes to get to Wrigley from the surrounding area there. When these apartment buildings are successful, and they will be because we’re going to build something that people will be proud to live here, you’re going to see developments sprouting up all over.