When Andrew Berlin bought the Class A minor league baseball team in South Bend, one of his goals was to build a state of the art workout center.

He wanted a place where the minor league players could hone their skills in an effort to make it to the major leagues, but also a facility that could be opened up to the community, where camps could be held so area youngsters could come in and learn the skills needed to begin their own journey into the world of baseball.

Wednesday afternoon, the South Bend Cubs and 1st Source Bank announced a five-year naming rights deal for the center that will now be known as the 1st Source Bank Performance Center. 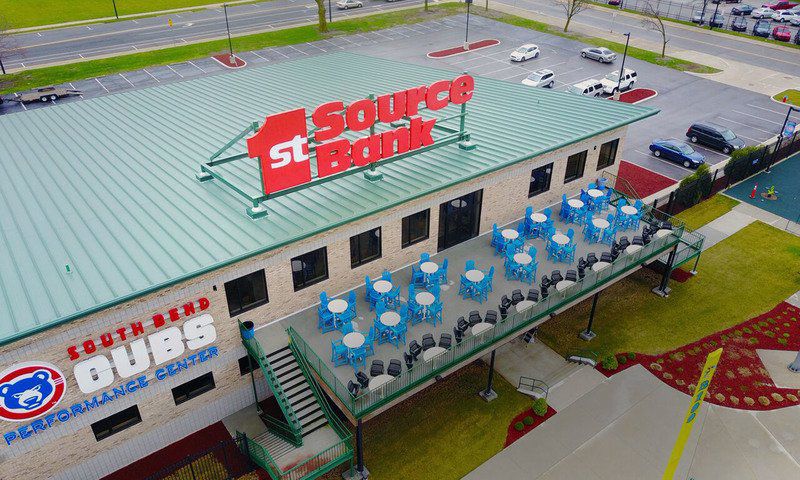 “Today, I’m happy to announce the naming rights for the world-class Performance Center here at Four Winds Field have been awarded to 1st Source Bank,” said Team Chairman/Owner Berlin in a press conference announcing the agreement at Four Winds Field. “This is not just another attempt for a business to get their name in the paper. 1st Source is making another commitment to baseball in the South Bend community and to the community in general. The bank has been supporting baseball in South Bend for almost 30 years. There has never been a game played on this field without some kind of 1st Source presence.”

Tom Seitz, 1st Source Bank President, said: “We couldn’t be more thrilled to partner with the South Bend Cubs. It’s a terrific opportunity for 1st Source to help the South Bend Cubs continue to grow and succeed in our community. It’s also a great way for the bank to support area youth who use the Performance Center to develop their athletic skills.”

One of the reasons behind the building of the Performance Center to begin with was Berlin’s desire to begin an association with the Chicago Cubs.

“When we bought the Sough Bend franchise, we looked at major league clubs we wanted to associate with and the Cubs were at the top of our list,” Berlin said. “When Major League Baseball is looking at an association with you they are not as concerned about the cleanliness of your bathrooms or the quality of your hot dogs as they are about how you are going to develop their players.

“Announcing the naming rights today makes it feel like the gamble we took in building the facility is paying off. It certainly makes it more financially stable.”

“The road to the World Series went through South Bend,” he said. “Aroldis Chapman (standout closer obtained during the season from the New York Yankees) would not have come to the Cubs if there was not a player like Ronald Torreyes (shortstop prospect) to trade.”

Berlin is expecting long-term success for the Cubs and wants to see some of the success trickle down to South Bend.

“The front office people — Theo Epstein, President of Baseball Operations and Jed Hoyer, Executive Vice President, General Manager — are saying the team is not built for winning one, but for winning more than one,” he said.

Berlin explained why he was interested in investing in the South Bend franchise.

“One of the things that attracted me was that in the 45-minute drive around the area you are around 750,000 people,” the owner said. “You also have Notre Dame here and you have fans of Indiana University, Purdue University or whatever school they follow. While we are not in direct competition with Notre Dame football or basketball we do attract some of the same fans.

“The other thing that attracted me was there seemed to be a real hunger here for a professional sports franchise.”

Berlin announced his purchase of the South Bend franchise in November 2011. According to the team’s website, the 2013 attendance figure was up 25 percent over the previous season’s mark of 189,575. A year ago, the franchise set a new attendance record for the third consecutive season, drawing a total of 350,803 fans.

“When we looked at South Bend we saw a jewel that was yet to be polished,” Berlin said.